Sometimes it’s clear that the time of a place is over; there’s nothing to do but to wrap up the camp and carry it to the next destination.

The problem is the bag.

It’s autumn and it will be winter, I can’t fit all I need into my Ryanair-sized hand luggage school backpack. I don’t know for how long I’m going, either. And what do I really need? The winter shoes and the winter jacket. Or do I just want to buy new ones or hope I’ll find some when the time comes?

I can’t take the piano.

My centre of gravity?

I don’t like “moving” anywhere. In 1989 we just needed two dutch plastic bags on a night train. 2004 I needed a few boxes and a car. 2006 one suitcase and a backpack? 2010 just a suitcase. 2013 just a backpack. Since then, the small orange backpack that fits cheap airlines for free. 2 pairs of pants, a bunch of shirts, a laptop.

I got tired of un-packing and re-packing in 2011 or so (if anything stresses me out, it’s packing). I accidentally ended up living in a place for 2 years. At the end of the 2 years when the time was clearly ripe for leaving, I realised I hadn’t unpacked – just needed to close the suitcase.

At the beginning of 2018, I thought I could stay somewhere a bit longer. I went back to taking the big backpack. It was January, in the mountains, I took winter clothes. Also a bunch of other useless junk items for winter in the cabin. Books. Painting equipment. A musical instrument. Sentimental items and presents. Expectations. I then had to carry all that stuff back, by surprise, very soon … pack within a day and jump onto a 12-hour train trip in the morning. Carrying all that stuff both ways sucked. Nunca mas. (Never again.)

Though admittedly, the expectations were the heaviest item.

I somehow landed in Berlin then (so you don’t know old-style punk hospitality? my friend said), and got the flu.

Someone convinced me I’m autistic since I had banged my head against the wall and I started seeing a therapist for money that wasn’t mine. I went back to mum and dad and brother and on the living room couch divested myself of further expectations. I started writing. I figured I needed to start making basic money. Then that I don’t care (can’t manage?) and that I need meaning.

It’s crazy enough that after my punk friend kicked me out I actually landed in your apartment in Berlin with that bag. I skimmed your books trying to figure out who you are. In your kitchen was brewing myself herbal decoctions to prevent boiling emotions turning into a physical fever, which would have sucked since I was in the house alone.

You never enter the same river twice. Still, I landed in that same weird apartment (former doctor’s surgery, tastelessly redecorated by a compatriot of mine, shame) with that same horrible bag containing clothes and books someone’d given me. I was even carrying back an ancient wooden board to paint icons on, that had been commissioned from me by her wealthy cousin.

Maybe I’ll take the paint from Krosno with me to paint the commissioned icon on one of the boards that are easy to find in the streets of Berlin. A year later. Maybe she still wants it. I’ll find some way to send it back to the mountains.

Treading timidly the same soil that always feels like it’s on a slope, knowing that the rocks can always crumble. Accepting the multiple repetition of mistakes in situations in which intelligence is useless.

I’ve also taken off my slippers in the kitchen and felt the ground and asked God to put ground beneath my feet. Is that sufficient for the magician? Or are you asking a more exigent ritual of me? 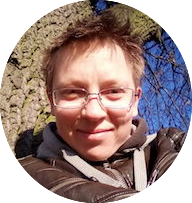 Queer neurodivergent on a journey. If not geographical then intellectual, emotional, or cultural. Even scores the occasional shamanic trip.

Reader feedback motivates me to keep hitting the keyboard, so please feel free to e-mail me thoughts related to this content.

If you are or suspect you are neurodivergent (autistic, ADD, HSP, empath, gifted) and confused, you’re welcome to chat with me (depending on capacity) – since so many people have helped me out, I’d like to pay it forward via peer support.